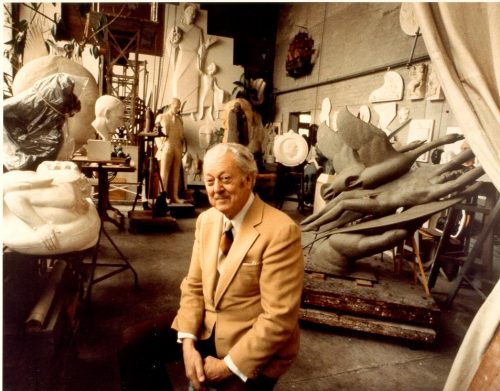 One of the most prolific sculptors of the twentieth century, Marshall M. Fredericks is known in America and abroad for his monumental figurative sculpture, public memorials and fountains, portraits, and animal figures.

Among Fredericks’s well-known works are the monumental Cleveland War Memorial: Fountain of Eternal Life in the Civic Center Mall in Cleveland, Ohio; The Expanding Universe Fountain at the Department of State Building in Washington, DC; Freedom of the Human Spirit in Flushing Meadow, New York; Levi L. Barbour Memorial Fountain on Belle Isle, a beautiful island park in Detroit, Michigan; Christ on the Cross at the Indian River Catholic Shrine in Indian River Michigan; and The Spirit of Detroit, situated in front of the city-county government building in Detroit. When Fredericks was in his mid 80s, he was commissioned by the board of Milles Garden in Stockholm to complete the design of a monumental work by Swedish sculptor Carl Milles, God on the Rainbow (Gud Fader På Himmelsbågen), and cast it in stainless steel with bronze figures, which today is situated in the harbor at Nacka Strand, Sweden. Two of The United States most beautiful and distinguished sculpture gardens include numerous works by Marshall Fredericks: the Meijer Gardens and Sculpture Park in Grand Rapids, Michigan, and Brookgreen Gardens in Pawleys Island, South Carolina.  Millesgården in Stockholm, Sweden is home to two of Fredericks’s sculptures.

Marshall M. Fredericks was born in Rock Island, Illinois on January 31, 1908.  His family moved to Florida for a short time before settling in Cleveland, Ohio where he spent his youth. Fredericks graduated from the Cleveland School of Art in 1930 and then journeyed to Sweden on a fellowship to study with sculptor Carl Milles (1875-1955).

After some months, he studied in other academies and private studios in Denmark, Germany, France and Italy, and traveled extensively in Europe and North Africa.In 1932 Carl Milles invited Fredericks to join the staffs of Cranbrook Academy of Art, Cranbrook and Kingswood Schools in Bloomfield Hills, Michigan where he taught until he enlisted in the armed forces in 1942.

After World War II, Fredericks worked continuously on numerous commissions for fountains, memorials, free-standing sculptures, reliefs, and portraits in bronze and other materials. Many of his works have spiritual intensity, lighthearted humor, and a warm and gentle humanist spirit, like that found in Fredericks himself, attributed to his Scandinavian heritage.

Fredericks was the recipient of many American and foreign awards for his artistic and humanitarian achievements, including the National Sculpture Society’s highest award, the Medal of Honor, in recognition of his distinguished body of works in this country and in Europe.  He received the Gold Fine Arts Medal of the American Institute of Architects, Gold Medal of Honor of the Architectural League of New York, Gold Medal of Honor from the Michigan Academy of Science, Arts and Letters, and the Henry Hering Medal from the National Sculpture Society.  In 1966, he was the recipient of the Distinguished Service Award of the Michigan Association of the Professions.

He resided in Birmingham, Michigan with his wife Rosalind Cooke Fredericks until his death in April 1998.