“My First Meeting with Carl Milles” by Marshall M. Fredericks

From the Archives: “My First Meeting with Carl Milles” by Marshall M. Fredericks 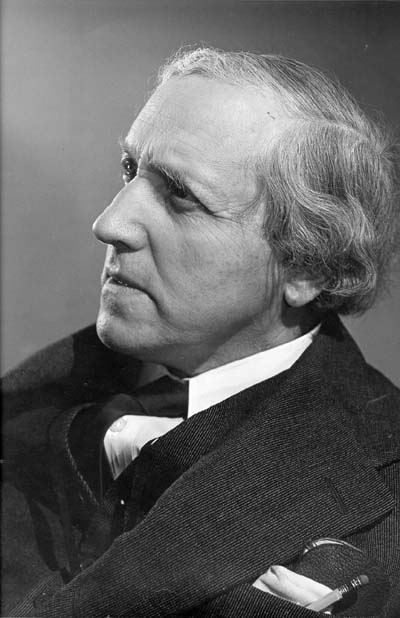 In 1930, following his graduation from the Cleveland School of Art, Marshall Fredericks was awarded the Herman Matzen traveling fellowship to study in Europe. In the excerpt below, Fredericks recounts his first meeting with his mentor and lifelong friend, the sculptor Carl Milles.

… I saw the great sculptor, Carl Milles. It is clear to me as though it were transpiring before my very eyes. I had to work hard to get to art school and work even harder after I got there to stay in school. It was a good school, the Cleveland School of Art; it has a broad curriculum. I tried everything they had; we were required to.

I seemed to have a certain talent for almost everyone one of the media, but as time went on, I become more and more interested in sculpture and the three-dimensional arts, and concentrated from then on with that. Of course, in the study of sculpture, I became aware of great sculptors throughout the world, one of them being Carl Milles in Sweden, among other Scandinavian sculptors. But he stood out, and I collected quite a little portfolio of photographs and articles about him which I treasured and reread and reread.

Finally, after four years of art school, I was fortunate in winning the one, sole traveling fellowship which gave me $1,000 and allowed me to go to Europe. I was very young, naive and innocent. I had seen very little, traveled very little and done very little. But I had a great desire to learn, and I was anxious to get as much out of life as I could. And so, as soon as school was over, I started out with very little preparation, really , but just the desire to learn and become a sculptor myself.

I set out directly for Stockholm, Sweden, via the old Drottningholm ship which took two weeks to get to Stockholm. It was very exciting travel, of course, and I met people I never believed I would ever meet. I finally got to Sweden and went immediately to the Royal Academy where I had read that Mr. Milles had been teaching. It was a Saturday, but I couldn’t wait until Monday. I went there anyway. No one was in the Academy but the watchman, but he let me in and I asked him if I could see Mr. Milles. He spoke very little English and I had only a smattering of Scandinavian languages, but we communicated well. He told me that Carl had not taught for five years–he was too busy. But he said he would call him on the phone and tell him I was there and we could speak together. He realized that I had felt very lost, that I was sort of heartbroken, that I had come a long way expecting to enroll in school and now, there was no school. So he called Carl on the phone.

I call him Carl now, but I never did all the years I knew him. I respected him so much that I always called him Mr. Milles. He used to tease me about it. But, anyway, he came on the phone and was so sensitive and considerate. He asked me immediately to come out on a streetcar to Lidingo and see him in his home. This is, of course, far more than I had ever imagined I could do. But I did. I got on a streetcar and went out to Lidingo and walked from the streetcar across the bridge and over to his marvelous gardens. It had a big wrought iron gate which he had designed. Beautiful, terribly impressive, the most exciting entrance to any place I had ever seen. I rang the bell and a man came to the gate and had been anticipating my arrival and told me to follow him. So he took me through some byways through the garden and finally into an entrance. He said Mr. Milles is in there, that is his atelier. He told me to go in, which I did. It was quite a large studio, quite high and spacious, filled with many things. It was a little hard for me to see at first, but then I realized at the other end were some scaffoldings and up on the top of this scaffolding, working on a gigantic clay figure, the central figure for the Poseidon Fountain in Gothenberg, was Carl Milles.

He was working away in a white smock and when he heard the door open, he turned and motioned me to stay and he would come right down, which he did. You can imagine, however, my reaction when I saw this famous, great man up there on the scaffolding working on a figure ten times the size of any I had ever seen before and ten times as marvelous. Actually there working, like some sort of superman or god or something. I was so impressed and overwhelmed that I almost fainted. I was just speechless and stood there until he crawled down a big ladder and came over toward me. He came over and offered his hand and we shook hands and he said, “I’m Carl Milles, and I know you’re Marshall Fredericks. Welcome to Sweden and welcome to Lidingo. You are very welcome and this, of course, as you see, is my studio. I don’t imagine you have ever seen a studio like this before, have you?” Of course, I had to say I hadn’t. He said, “Well, this is a good work place and I have done many things here. As you can see, I am now working on the big Poseidon in water clay. It will go down in Gothenberg in the big fountain that will be built there in the square.” But he said, “Enough of that. You will see many things while you are here. Come, let’s have a cup of coffee, it’s just about that time.”

So, we went out into the loggia outside of his studio. There was a marvelous fountain there with the “Four Tritons.” Duplicates of these now are at Cranbrook and those were duplicates of those at Hamsted, together with the bit “Europa and the Bull.” But, there in the garden, he had the big “Four Tritons” in a rather concentrated pool with lots of water playing. The sound of it and the sight of it was more than I could stand. I had never really had first hand contact with a fountain before. Never, never one as beautiful as this one. Exciting, original, it was unbelievable what was going through my mind and what was happening to me. It was sort of a birth process. As I think about it today, I get chills because it was so exciting and just unbelievable thrilling to me. But, at any rate, a man came out and brought some coffee and little cakes and we sat by the pool and enjoyed them. 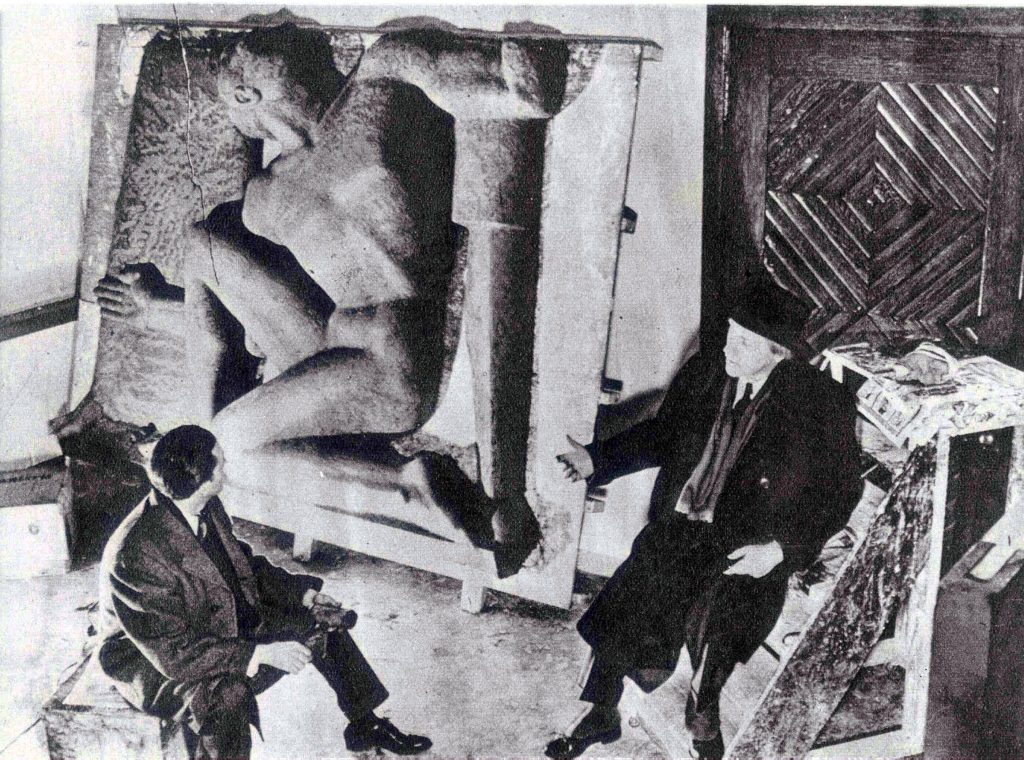 We talked for quite awhile and he asked me many, many questions about my family, my childhood, about my reasons for coming over there and about my schooling. All kinds of things. He seemed to be really interested and very aware that I had gone to all that distance just to meet him and to work with him. Several times he said he couldn’t believe that I would go to all that trouble just for him or to work just with him. Then he asked various questions which intrigue me now. He said, “You write poetry.” I said, “Well, I guess all young people do. Once in a while I write some just when I’m alone or somewhere I have never been before, or see something I have never seen before. I put it down on paper — my reaction to it.” He said, “Do you have any with you?” I said, “Yes, I do. It’s just a little notebook.” “Let me see it.” So, I gave it to him. He read part of it and said, “This is very interesting.” He said, “I love poetry. I love all written things, good things.” He said, “This is good, it is your real heart speaking. It is not a trained writer’s poetry, but it is the writing of somebody who was feeling at the time. Do you have a copy I can have of these things?” I said, “No, but please take that.” He said, “You can’t give me your only copy.” I said, “I have some notes at home, original notes, and that is sufficient for me. Please, take it.” He said, “I will, and I will put it in my library.” And it is there today.

Anyway, it was a marvelous, marvelous experience. The thrill of it will never leave me. The pictures as I sit here now are just as clear as though it were yesterday or sooner. It is all in color. It was in early June. Sweden is beautiful at that time of year. The birds were singing, the flowers, many of them wild. The fountain was spraying, and here was this striking looking man in his working smock, his strong hands, his handsome hair, combed down over the sides of his head, quite long, and his kindness was so evident, his voice so interesting and strong. His English was limited but understandable. Well, well it was something. 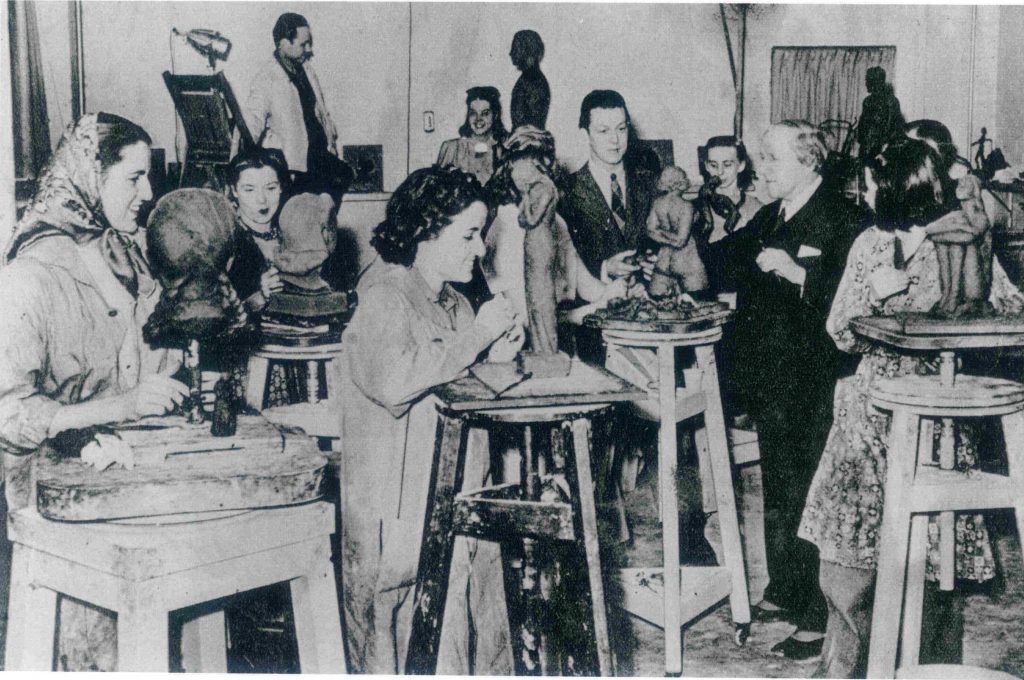 Then, of course, before long he said, “Come, come, we will go into the house. I want you to meet my darling Olga.” So we got up and went into the residence which is now a museum and, of course, I had never seen a place like that with all of his treasures from the olden day: marvelous antiques, sculptures, wood carvings, furniture, and many, many small sculptures which he had made and which he kept insides because they were too fragile or too small to be outside. Mosaics on the floors which he had designed and made by hand. Even the lamps in the ceiling were carved alabaster which he had made himself. He had a music room with wonderful carved figures from the Middle Ages and a beautiful piano with a huge flower arrangement on it. Suddenly, in came Olga — this diminutive little darling blonde woman with her hair done up in the back of her head in sort of a coil, a long dress almost to the floor and little square-toed shoes. She spoke almost no English at all, she was Austrian, came from Graz. But this darling little thing, with her clear blue eyes and firm little hands, really welcomed me with sort of a little bow, which I imitated. I could see right away that we would be friends for the rest of her life. It was a moment always to be treasured and which occurred many times later on as I worked there.